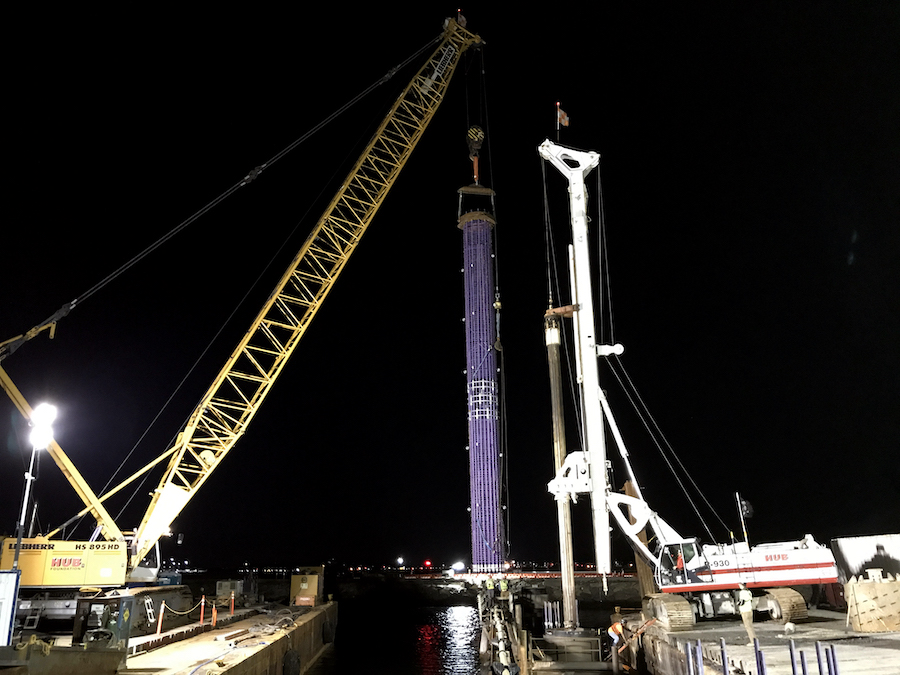 Boston Logan International Airport was opened in September, 1923, and was used mainly for the Army and Air Guard until 1927 when the first commercial flights were scheduled. Originally a small airfield, it wasn’t until the late 1940s that the airport added 1,800 acres of landfill in Boston Harbor. After World War II, the airport became a transatlantic gateway, offering service to London, Dublin, Scotland, Lisbon, Paris, and the Azores.

Today, Boston’s Logan International Airport carries as many as 1,500 flights per day, with that number growing yearly. An extension to runway 4R/22L was needed, but there was no room on the existing landfill for approach lighting. Instead, the light towers would need to be built 800 feet into the waters of Boston Harbor for the approach onto the runway. One of the challenges with this project was the exact length of the towers was unknown until the holes for the steel reinforced cages were drilled through difficult soil conditions and hard bedrock was reached. And at that point, there was a 48-hour time frame imposed from the moment drilling stopped to the final placement of the cage.

The MASSport team called on McCourt Construction to help with this unique project. Nucor Skyline and their sister company, Harris Rebar, were hired for their engineering experience to assist with the distinct steel structural needs of the new light towers. Skyline was able to produce pre-fabricated bar cages, from 60 to 83 feet in length, in their Camp Hill, PA facility. Each of the bar cages, weighing upwards of 35 tons, were comprised of 24 #28 bars and 24 #18 bars, along with welded reinforcing steel hoops, and 4000 standard reinforcing steel wire ties. The bars and hoops were coated to ASTM A934, Purple Marine Epoxy, and all the hardware and plates were hot dip galvanized to avoid corrosion.

Once drilling was complete, it was imperative that the light towers were in place within the 48-hour timeframe. Each cage was dropped into 7’ diameter spiralweld pipe piles, produced in the Newton, IL facility of Nucor Skyline.

The flexibility of Nucor Skyline and their ability to build the cages locally allowed the project to continue with little to no interruptions in a tight construction schedule.

“The project was extremely challenging and some unforeseen field conditions forced changes to the production schedule. The Skyline Team worked with McCourt to modify production and minimize the impact on the overall project schedule.”