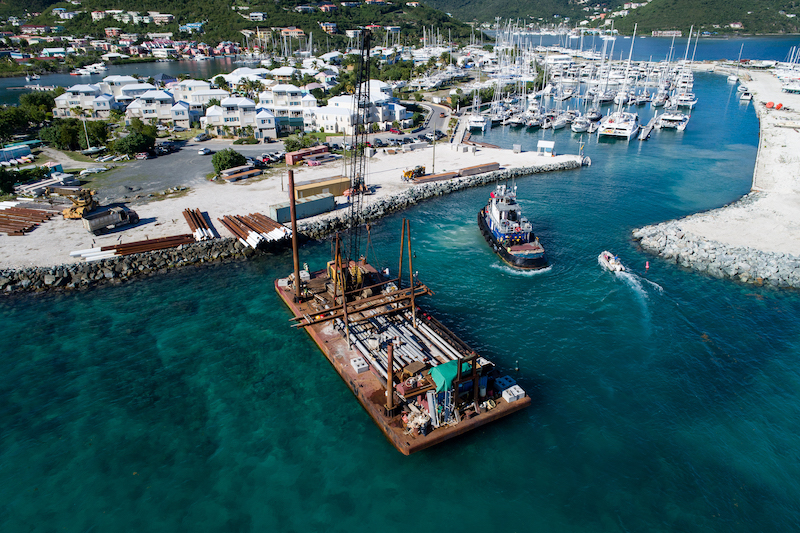 On September 6, 2017 Hurricane Irma tore through the British Virgin Islands with record-breaking, bark-stripping sustained wind speeds of 185mph and gusts over 200mph.  The eye passed over Road Town, Tortola, the country’s capital and home to many of the territory´s largest marinas, and infrastructural necessities.  All major cell towers were flattened, 12,000 telegraph poles snapped or felled, and 90% of commercial buildings suffered damage. Irma is the most powerful Atlantic hurricane in recorded history.

All the major marinas and resorts in the BVI were badly damaged and approximately 85% of housing stock – over 4,000 homes – was significantly impacted or destroyed.

Meridian Construction’s equipment was safely stashed in sheltered areas on land and hurricane holes afloat.  Cranes were welded to the barges, and spuds fully deployed.  The equipment fared well and elements of the company were functioning by September 9th.  But the passing of this catastrophic Category 5 hurricane saw Meridian having to re-task its operations and crew.

Meridian was immediately on the ground at the territory´s only commercial port in the BVI undertaking the remedial work to be done on the two, severely hurricane-damaged, main warehouses that were used for imports.

Meridian also mobilized its crew to assist local telecoms provider, Digicel, in the erection of transportable cellular towers – Cells on Wheels (COWs) – within five days of hurricane Irma knocking out communication in the BVI.

Not two weeks after Hurricane Irma left the Virgin Islands in a devastated state, the territory was bracing for the impact of Hurricane Maria. Meridian provided equipment and manpower to secure a temporary roof on the MultiSports Complex in Road Town which was serving as a shelter to many families and individuals displaced by Irma.

Mobilizing a construction barge and 225-ton crane to the North Sound in Virgin Gorda, they also attended to the removal of the 75-ft pilings and docks of the mega yacht marina at the Yacht Club Costa Smerelda before teaming up with Commercial Dive Services to start the clean up and restoration of other marinas and the crippled marine industry.

Using Meridian’s inventory of cranes and barges, salvage and recovery work was carried out in Tortola and Virgin Gorda to raise motor and sailing vessels, and remove broken docks and pilings from the seabed. 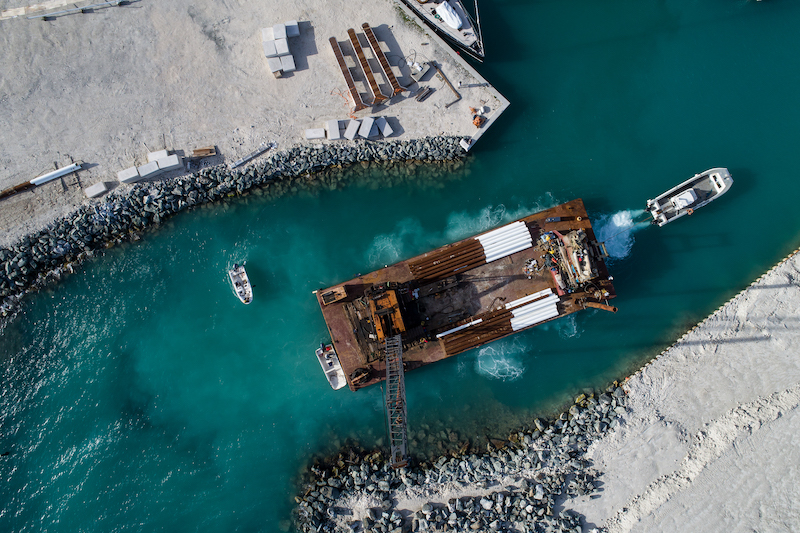 The crew worked skillfully to clear the marinas at the Moorings and Village Cay ready for a resumption of service as well as providing salvage services at Virgin Gorda Yacht Harbour and Paraquita Bay.

Over 250 sunken of damaged vessels were recovered in this operation.  After months of recovery work and marinas cleared of debris, Meridian was able to turn its attention to the rebuild.

Meridian was contracted by the Moorings charter company to repair the docks of its operation in Road Town and to construct a new concrete dock to increase the number of boat slips available to their fleet.

Construction of the precast pile tubs, caps and slabs, rebar cages, and all other steelwork fabrication was undertaken at its site in Tortola and delivered on one of its smaller material barges while the crane, hydraulic pile and vibrohammer were deployed on a larger construction barge.

Work nears completion at the Marina Village at Oil Nut Bay where Meridian built the deck and swimming pool.

The corner pool was precast in three sections, put in place on-site and completed with concrete infill.

The new addition to the residential resort in the North Sound, Virgin Gorda includes a new waterfront restaurant and bar, a market, deli and provisioning store, a boutique and a library.

Meridian completed phase 1 of the docks of the state-of-the art Marina at the end of the summer 2018. Once finished, the new docks will offer secure alongside mooring that can accommodate yachts up to 40 meters (130 feet) and a draft of up to 2.4 meters (8 feet).

Elsewhere, Meridian was the main contractor for the recovery work at Guana Island, an exclusive resort to the north west of Tortola where guest accommodations and facilities were restored. Repairs were undertaken to the main dock at Richard Branson’s Necker Island in Virgin Gorda and the “Red Dock” was installed as the new service dock.

In addition to recovery and rebuild, Meridian was also able to complete the construction of the new marina and private docks for the Brandywine Estate Bayside Residences in Tortola. The marina which is constructed from precast concrete, provides 6 berths on the end of the main tee dock and 4 berths on the inside of the tee dock.

The cruise ship pier, built by Meridian in 2014, suffered no damage and was reopened  to welcome the return of the Disney Cruise Line, Disney Fantasy on August 28, 2018. 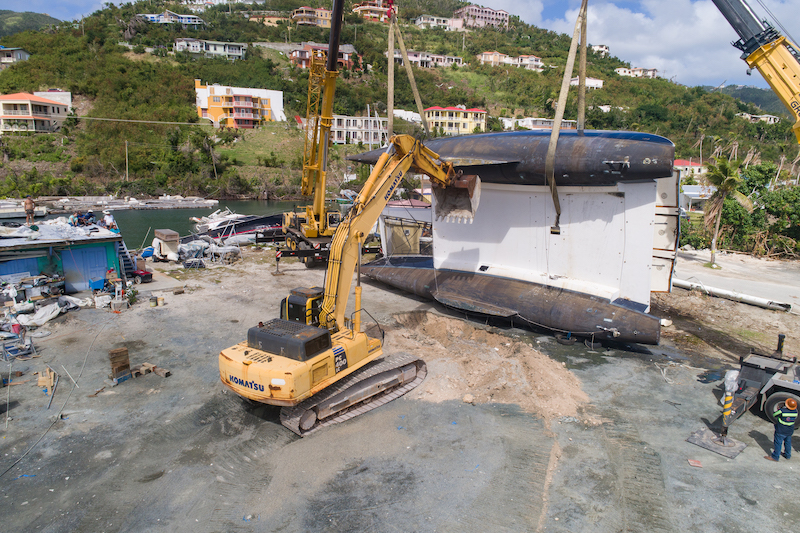 Meridian Construction Ltd was engaged to undertake the dry salvage of the 30-tonne Sunreef 62, Catsy, which had been flipped upside down during the passage of Hurricane Irma on September 6, 2017.

This complicated project, where the priority was to minimize further damage, needed three cranes, and an excavator. A team comprised of Meridian, Commercial Dive Services, and B&G Lifting undertook the 10-hour project with six hours of prep work and four hours of lifting, moving, and flipping this yacht.

On lift day, Friday, January 12, the righting was undertaken in two parts.

Part one involved moving the boat off the two small buildings that it had landed on during Irma, and also the road at the entrance to Nanny Cay that it was blocking.  Two cranes – an 85-tonne and a 90-tonne – were used for this operation.  Slings were rigged at either end of the yacht, and it was lifted and moved into the boatyard.

Part two entailed the flipping of the yacht.  The slings were re-rigged so that they were supporting one hull, the port hull, that was going to be raised to lift the boat onto its side.

Tires were rigged to protect the starboard side of the yacht, which would be on the ground once it was on its side after the initial 90 degree lift.

The two cranes lifted Catsy onto its side without any problems.  Once Catsy was on its side and supported by the two cranes, an excavator was brought in to dig a pit to accommodate Catsy’s   keel and ensure that it didn’t bear any weight as the yacht was tipped.

For additional control as Catsy was lowered, the excavator’s bucket was placed underneath the uppermost keel.

Once everything was in place, a third, 27-tonne crane, was brought in.  This crane’s boom was used to push Catsy over, where the excavator, and the two large cranes controlled Catsy’s roll and descent until the yacht’s hull was safely on the ground.