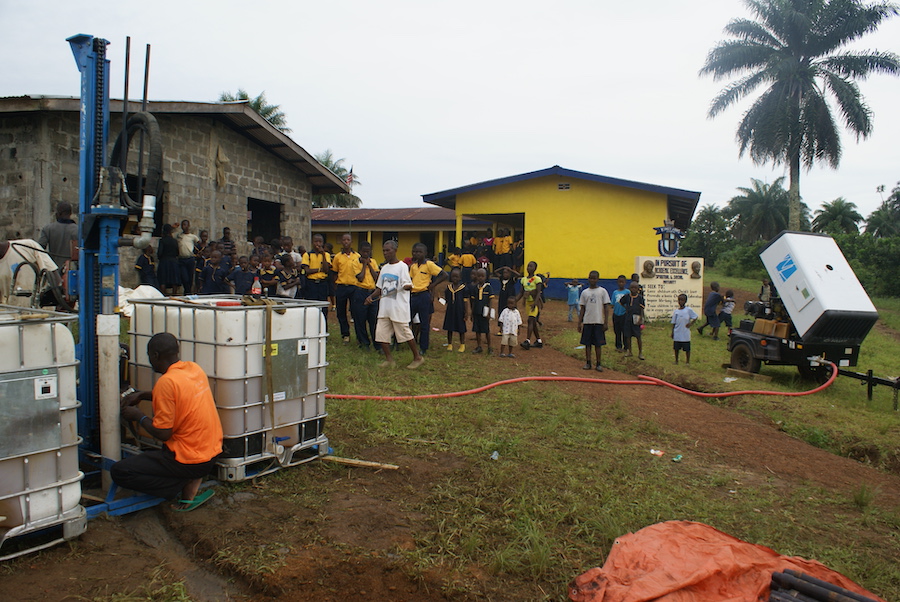 Civil turmoil, dense forests and under-developed infrastructure blanket a majority of Liberia and Sierra Leone. Add to that a lack of clean drinking water, and daily life in many of the region’s isolated communities is an absolute battle. The difficulty of providing clean water to these rural citizens is compounded by the challenge of finding equipment that’s powerful enough to drill through the region’s dense basalt rock yet portable enough to transport over the rough terrain and unmaintained roads.

Roland Bergeron, founder of Water of Life International, has made it his life’s work to drill wells in these rural villages, where a lack of clean water aids the spread of diseases and results in tens of thousands of deaths each year.

“We could drill until the cows come home and we still wouldn’t meet the demand for fresh water,” Bergeron said. “From the difficulty of transporting equipment, to the volcanic bedrock under much of the region, we had to overcome a number of obstacles that stood in the way of successful drilling.”

To make matters worse, recent civil conflicts left many of the region’s wells in disrepair or destroyed by rival groups. Bringing water back to these communities became Bergeron’s primary focus.

Through his previous well drilling experience in Central America, Bergeron became familiar with Lone Star Drills, a manufacturer of lightweight rigs designed with the power and portability needed to drill water wells in challenging and remote regions. Needing a rig with similar capabilities for the conditions in Africa, Water of Life purchased its first drill from Lone Star in 2008 — the trailer-mounted LS300T+. It’s capable of drilling to 300 feet and provides 5,000 pounds of push/pull-back force — enough depth and power to overcome significant terrain challenges.

Over the next couple of years, the LS300T+ offered great success for replacing the damaged and neglected wells scattered throughout war-torn West Africa, however, Bergeron saw a significant need for new wells in villages where solid bedrock and limited road access had prevented successful well drilling in the past.

“Most of the areas where digging with hand tools is possible already have wells,” Bergeron said. “Ultimately, accessing these other villages with equipment that’s capable of penetrating the volcanic rock proved a significant hurdle for previous groups.” 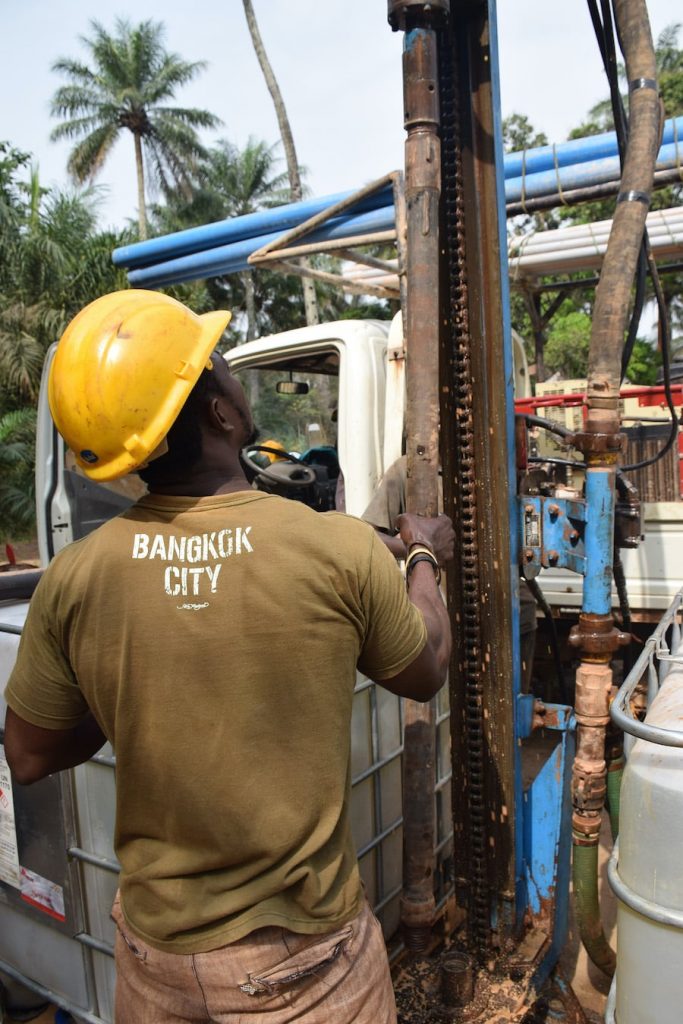 Getting There is Half the Battle

To navigate the region’s dirt roads, Water of Life has no choice but to rely on rugged-yet-nimble four-wheel drive flatbed trucks and Land Cruiser pickups. While these vehicles are capable of towing trailers, the road conditions, and in many cases a complete lack of roads, made towing equipment virtually impossible.

Without the option to tow, Water of Life was tasked with finding an alternative and again Bergeron turned to Lone Star Drills.

“We presented our transportation dilemma to Lone Star and they were quick to help us develop a solution. Their engineers designed an upgraded version of the LS300T+ that can easily be disassembled and loaded onto a truck,” he said. “The custom rig pairs the mast, rotary and power source from their trailer-mounted version with a truck mounting frame and table base that allow the drill to operate as a stand-alone unit.”

The new design made it possible to load the drill onto a pickup and haul to places where successful well drilling had never been done. Transporting the drill in such a way requires the crew to disconnect the hydraulic power unit, remove the head of the drill and remove the mast from the stand — about an hour’s worth of labor.

“Continually taking apart and reassembling the drill does add a bit of time to each project, but it’s minimal,” Bergeron said. “The hour or so it takes to reassemble the rig is a small price to pay for being able to access these communities.”

With solutions in place to overcome the obstacles on the surface, Water of Life still faced the challenge of penetrating the dense volcanic rock beneath. A majority of the new well locations they planned to drill required drilling through basalt. Comparable to granite and quartz, basalt rates at about seven or eight on the Mohs scale of mineral hardness.

To successfully get through the rock, Water of Life would have to switch from their roller cone bits drilling method. These tough bits are capable of powering through clay and soft rock but cannot handle the bedrock in Sierra Leone and Liberia. This is when Bergeron turned to down-the-hole hammers. DTH hammers operate with a percussive motion similar to that of a jackhammer. The pounding allows them to drill through rock formations such as limestone, sandstone and basalt when other bits would fail.

After doing some research, Bergeron found a small-diameter, low-pressure DTH hammer that could quickly drill a borehole of 3-3/4 or 3-7/8 inches with their adapted LS300T+. Finding a highly efficient low-pressure hammer further eased transportation concerns by allowing them to use a 185-cfm air compressor — a compact and portable compressor size.

From tackling the rugged terrain to searching for portable and economical equipment, Bergeron had found a water well drilling solution that proved highly productive and reliable in a setting where few had found success before. 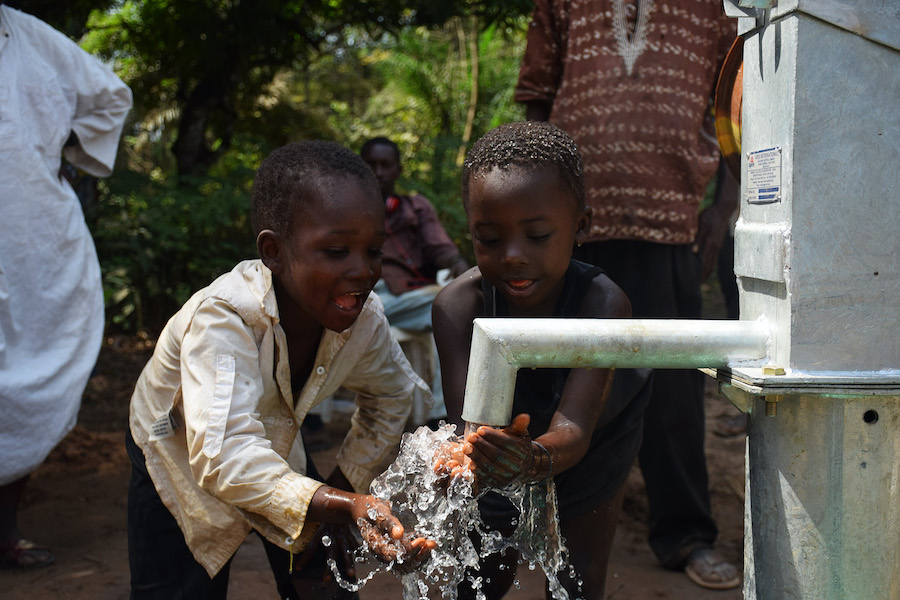 Delivering on a Promise

“One of the first wells we drilled with the upgraded LS300T+ reached 260 feet. That’s the deepest we’ve ever had to drill,” Bergeron said. “But, we chose that location because it would be a challenge, and without the LS300T+ and DTH hammer, there’s no way we could have brought water to that community.”

Water of Life now operates three upgraded LS300T+ drills in Liberia with a fourth in Sierra Leone, allowing the group to drill as many as 17 wells each month. Last year, the ministry completed 220 new wells in West Africa, supplying fresh water to more than 150,000 people.