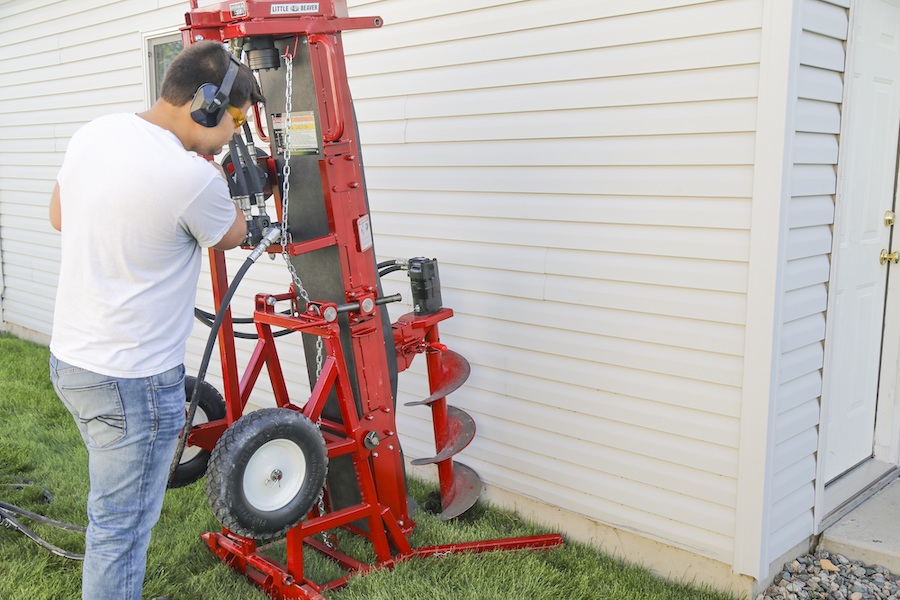 The strength of a structure lies in its foundation. Without a strong base, the building is at risk. And even though a house may have initially been built with a sufficient base, foundation repair is occasionally unavoidable.

Eddie Zansler, owner of North Dallas Foundation Repair, has been in the business for 24 years. He knows how important it is to have a hardworking crew and perhaps even harder-working machinery on a jobsite. When it comes to installing concrete piers, Zansler swears by the Big Beaver earth drill from Texas-based company Little Beaver.

The fine art of foundation repair

Foundation problems are most commonly a result of soil conditions, which is evident in clay-filled Texas. Expansive clay soil affects structural support, often leading to foundation cracking over time.

“The north Texas dirt we’re known for shifts over time,” Zansler said. “It contracts and expands, depending on the weather. We’re very familiar with its effect on properties’ foundations.”

When a foundation begins to shift, the entire property can show signs of damage. Visual indicators on a house include misaligned doors, cracks in sheetrock and brick separation. Other signs include warped framing, pluming breaks and tilting chimneys.

“It’s a good idea to call in a contractor or inspector when you first spot signs of damage,” Zansler said. “Catching a problem early on can help reduce the cost of having your entire foundation repaired. There are several different approaches to the process and some of that decision comes from how far along the damage is.”

While there are many practices and methods of foundation repair, one thing’s certain: if not done correctly, it can cause expensive problems down the line.

A method to the madness

There’s no one-size-fits-all approach to repairing foundation. There are upwards of 10 methods of foundation repair, and they often go by multiple names. In the most common method, contractors will use some version of a steel or concrete pier support to minimize stress on foundations.

Steel piers – also called push piers and helical piers — are gaining popularity because they result in minimal landscape interruption and can be installed faster than other methods. These screw-like steel shafts are driven into the ground and are commonly used for new construction. However, concrete piers can be a more effective option, as they can withstand higher load capacity and are often less expensive.

“Concrete piers are an economical solution for a lot of customers,” Zansler said. “They’re also sometimes the only choice, as steel piers aren’t usable in all locations or soil conditions.”

When it comes to installing concrete piers, the 6-inch round concrete sections are pushed directly into the ground. This is done with a hydraulic ram that is secured to the slab of the structure that needs to be lifted, and then it is lifted until a certain resistance pressure is established.

There are obviously many ways to remove dirt to prepare for foundation repair. A manual process — hand-digging holes — results in little landscape interruption, but is much harder on the workers. Large equipment options like a mini excavator are less labor-intensive, but can result in a torn-up yard and increased project costs.

For residential foundation repair, which makes up the majority of Zansler’s projects, larger equipment is seldom the best choice. These projects often involve tight spaces and finished landscaping, which can present challenges. For these cases, Zansler and his crew turn to the Big Beaver drill from Little Beaver. The auger drill rig is used for environmental test wells and soil sampling, but contractors nationwide also favor it as a reliable machine for foundation repair.

“The confined spaces and the landscaping make it hard to use an excavator or oversized equipment,” Zansler said. “The Big Beaver is ideal for those situations.” 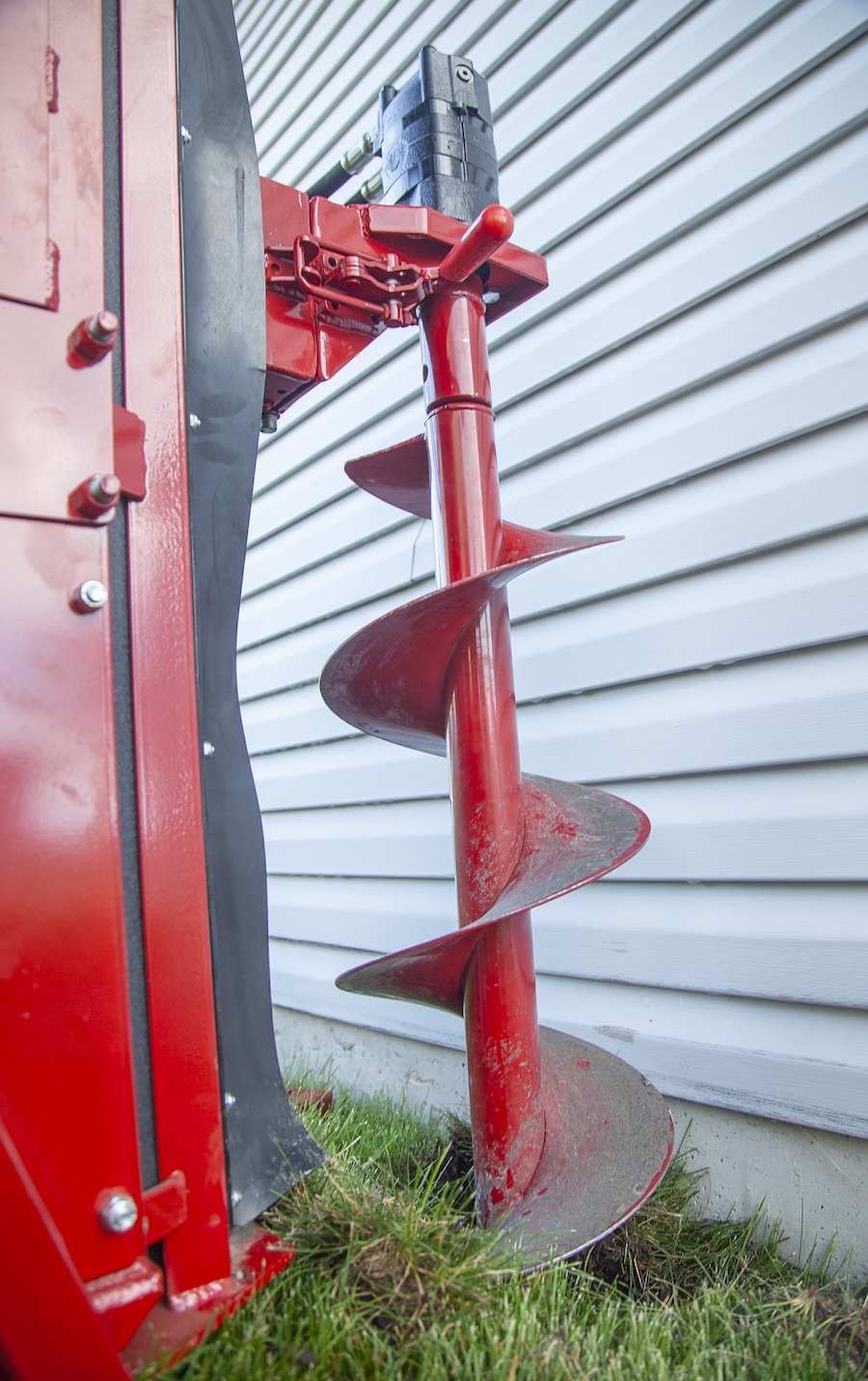 Foundation repair with the Big Beaver

No matter which method is used for installing piers, there’s no doubt that they require a considerable amount of manpower, machinery and time. When installing a drilled concrete pier, hard-working employees are key, but so is finding pieces of machinery that are perfect for the job.

To install the concrete piers, Zansler and his crew must first dig a 2-foot square hole in front of the foundation, then they dig 2 feet down below the foundation, followed by an additional foot underneath the home. After these holes — called boxes — are established, they bring in the Big Beaver.

Crews use the 12-inch auger to drill a hole anywhere from 12 to 15 feet deep. Depending on the structure and soil conditions, the angle of the pier can range from 10 to 15 degrees, which makes the Big Beaver’s ability to align in any position from vertical critical to the installation process. The drill’s flexible positioning allows users to get close to structures.

Once the hole is drilled, Zansler’s crew places a steel rebar cage down the hole and secures it to another cage for the box. Once these are in place, they then fill the hole and the box with concrete. Once the concrete has dried, this gives them the platform they need to lift the structure.

Minimizing labor in a labor-intensive industry

“With smaller handheld augers, you have to lift up on the auger head itself, which really strains my men,” Zansler said. “Whereas with the Big Beaver, all of the lifting is done by the machine. Because it is hydraulically driven, the up and down movement of the auger is controlled by simply pushing and pulling a lever. The rotation of the auger for forward and reverse is done with a separate lever. Because the Big Beaver uses continuous flight augers, this brings all of the soil cuttings to the surface where they can easily be removed with a shovel.”

By the end of an 8-hour, 100-degree workday, it’s natural that workers experience complete exhaustion. But with a Big Beaver, it doesn’t matter the time of day or the temperature; the machine is always ready to tackle a project.

In an industry where physical labor plays a huge role, making the work easier for employees makes all the difference. Zansler says they’ve added motorized wheelbarrows and dump trailers, among other equipment, to help ease the physical strain on workers.

“We want them to utilize the equipment,” Zansler said. “Not their backs.”

Keeping workers safe and uninjured is key to avoiding the dreaded employee turnover. Providing easy-to-use equipment like the Big Beaver is key, according to Zansler.

“The machines are straightforward,” Zansler said. “Some of my guys have been working for me for 22 years, so they know the machines like the back of their hands.” 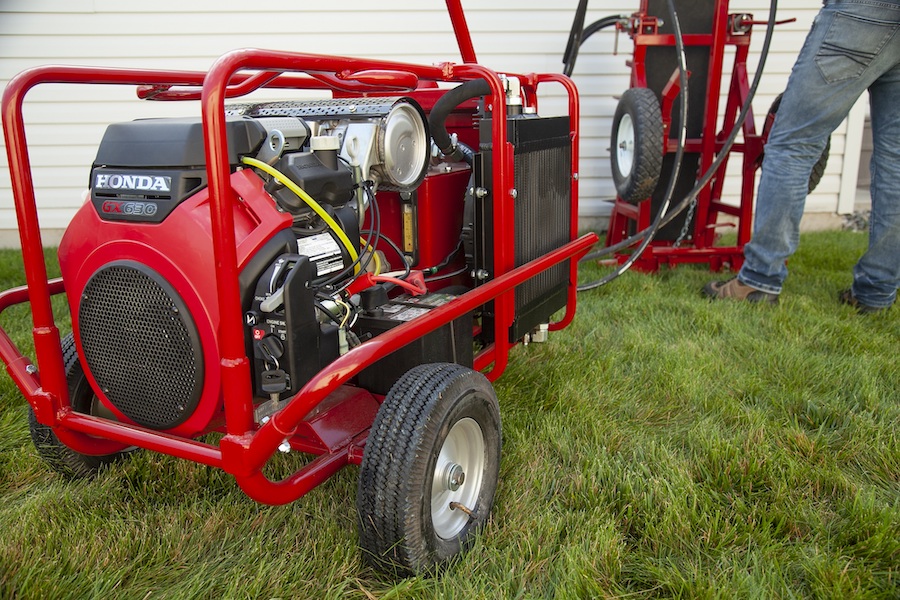 If it ain’t broke, don’t fix it

The Big Beaver has been Zansler’s No. 1 piece of equipment for more than 12 years. With the combination of safety and high-quality work they can provide with it, he says they will continue using it.

“With the Big Beaver, we’re able to reach the maximum depth possible, and penetrate rock if we hit it,” Zansler said. “It’s so powerful when drilling the holes, which results in a much higher-quality pier.”

The Big Beaver’s power comes from its Honda engine, which delivers 690 foot-pounds of torque to bore through any soil type.

“Its power is incredible,” Zansler said. “The RPMs when it penetrates the soil is considerably faster than other augers. I would say it’s a 15-20% increase in speed.”

He estimates that he’s used the Big Beaver to drill thousands of holes for foundation repair around the north Dallas area. With increased power and speed, Zansler and his team are able to complete more projects per week than they would be able to with an alternate method.

Better results with the Big Beaver

Overall, Zansler credits the Big Beaver to saving him hours or even days on a project. Without it, he’d have exhausted employees, more time into projects and lower-quality results. Just like a house needs a strong foundation, a contractor needs strong equipment, and the Big Beaver works to support both.