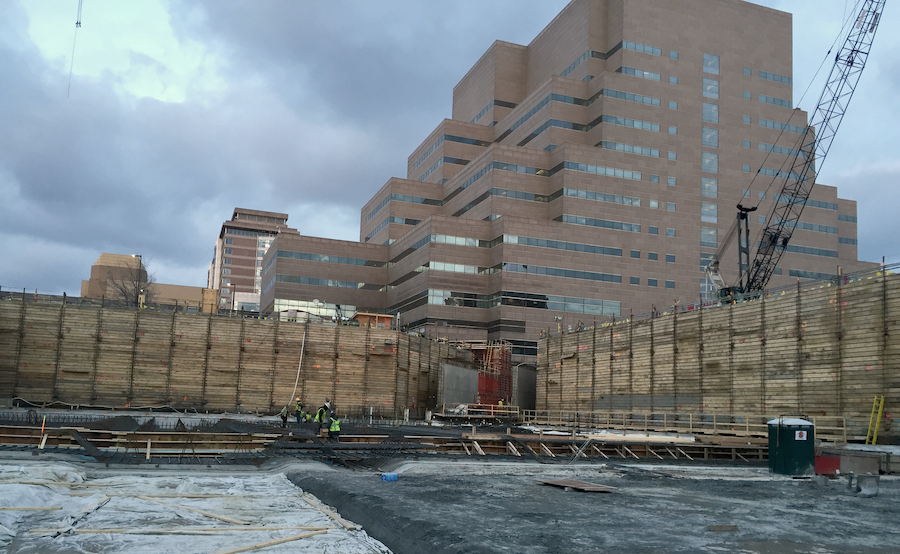 The Cleveland Clinic is one of the largest and most respected hospitals in the country. With over 48,000 employees, they are the largest private employer in Northeast Ohio. The new Cancer Institute will house exam rooms, infusion rooms, and meeting spaces for medical groups, arranged by specific types of cancer. The idea is to facilitate teamwork and close interaction with patients. The fundamental goal was to centralize cancer services so patients don’t have to walk from one building to another within the clinic’s vast complex.

With a pre-existing building that needed to be demolished, and a very tight schedule, there were many problems to be faced on this project. The aggressive project completion date influenced the final design of the system. The site consisted of loose to medium dense sands, silts, and gravel to a depth of 25 feet. Variable weathered shale to very hard shale was present for the balance of the 30 foot excavation. And once excavation commenced, many conflicting utilities, including multiple major electrical vaults and duct banks, were found and affected the design in many areas.

Guinto Schirack assisted in the pre-construction phase of the Cleveland Clinic Cancer Center project and worked closely with the design engineers to develop a cost-effective solution for the required 40,000 square feet of shoring. A traditional soldier beam and timber lagging wall with multiple levels of tieback anchors was chosen for this project. These multiple levels of anchors allowed the use of stock H-beam solider piles in lieu of utilizing heavier WF-beam sections from a mill rolling. Grouted hollow bar anchors were chosen for the tiebacks due to their speed and ease of installation. Nucor Skyline’s large stock inventory of multiple H-pile sizes and 52mm and 40 mm hollow bar anchors allowed construction to proceed immediately after the contract was awarded.

The final shoring design was optimized for the subsurface conditions and maximized anchor capacity in both upper level soils and bedrock shale. The design included 4,500 LF of soldier piling, and 14,000 LF of tieback anchors. Anchors were designed for loads ranging from 10 kip up to 135 kip capacity.