In January of 2013, Bermingham was contacted by Andrew Burns at Posillico Drilling for the purpose of sourcing a drilling system for reverse circulation down-the-hole hammer drilling.  The drilling was to be done through dense glascial outwash consisting of sand, gravel and cobble boulders.   Posillico was preparing to install 70x 24-inch Soldier Piles in Atlantic Yards and needed to be on-site in 3 months to begin the work.  This job presented a particular challenge for Posillico; sourcing equipment in traditional methods would have taken approximately 5 months, and only three months time was available.  In order to save time, Bermingham engineers suggested using Posillico’s existing and available Manitowoc 777 crane, in combination with Bermingham L18 Vertical Travel Leads (VTL) and a BHD-40 drill head (40,000 ft-lbs) complete with drill string. 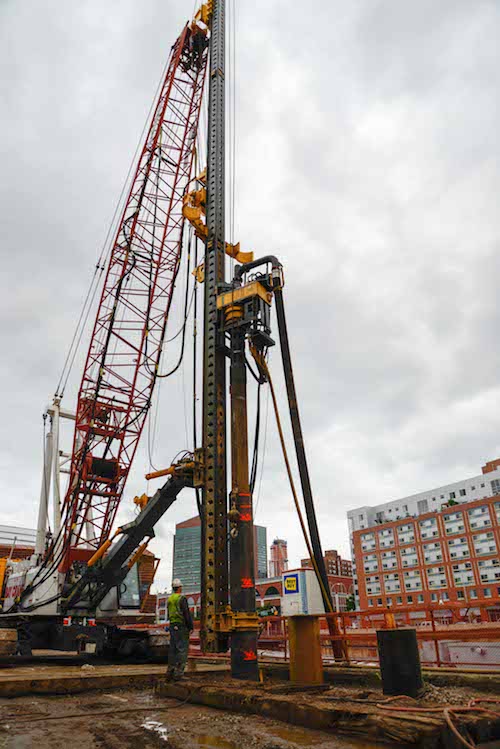 “We were able to mobilize the job in a short time frame, in essence short circuiting the start of the job. Bermingham’s system cut approximately 2 months off of the required mobilization time”.  – Andrew Burns

Posillico completed the soldier piles in the middle of June, 2013. Bermingham is proud to have contributed to another successful project by Posillico whom are now looking towards further phases and continued work in the Atlantic Yards.  For more information about the Atlantic Yards project please see the following section – Project Background.

The Atlantic Yards Project is an ongoing mixed-use commercial and residential development project located in Brooklyn, New York. When completed the development will boast 16 high-rise appartment buildings, the rail yard,  and the Barclay’s Center (home of the Brooklyn Nets). Involved in the scope of the project are improvements to the existing Atlantic Rail Yards of the Long Island Railroad. At the western end of the project lies Atlantic Avenue – Barclays Center subway station, the largest train station in Brooklyn and the third largest transit hub in New York City, serving nine different New York City Subway trains. The project features a new subway entrance near the front of Barclays Center.