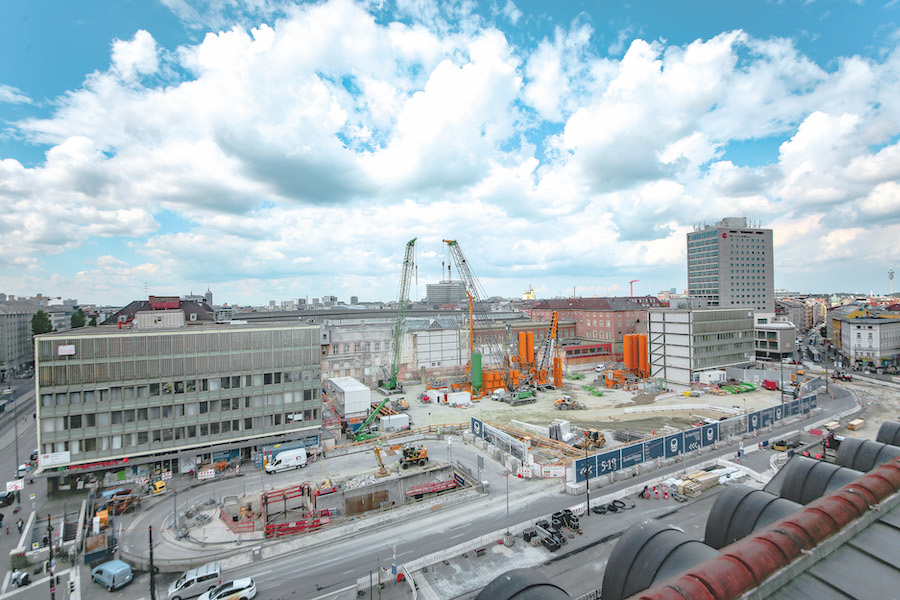 Munich, Germany – A length of around 11 km, 7 of them in a tunnel, and 3 underground stations – the 2nd core route in Munich is a major infrastructure project that is of enormous importance to the entire metropolitan area. Deutsche Bahn awarded the first two contracts for the main construction works (VE 10 + VE 30) to the companies Wayss & Freytag Ingenieurbau AG, Max Bögl Stiftung & Co. KG, Ed. Züblin AG, and BAUER Spezialtiefbau GmbH. These works include the western above-ground section, from Laim to Donnersberger Brücke, and the Hauptbahnhof (central railway station), including the tunnel section from Donnersberger Brücke to Marienhof.

After the partial demolition of the old station building at the central railway station, and the start of works for the execution of the primary supports for the floor slabs, a new section of the mega project started with the works for the second lot VE 30 (under Wayss & Freytag’s leadership) on 23 April 2020: construction of a retaining structure consisting of diaphragm walls up to a depth of around 65 m for the future underground S-Bahn station “München Hauptbahnhof” commenced.

The diaphragm wall top down method is being used for construction of the Hauptbahnhof underground station. A deep wall of reinforced concrete is initially being constructed to enclose the excavation pit of each station. The wall is made up of a series of cutter- excavated trenches in the ground that are then filled with concrete. This diaphragm wall forms the future outer shell of the station. Structurally it is required to secure the excavation pit against surrounding soil as well as ground water. Within the retaining structure consisting of diaphragm walls, excavation of the pit for each station is carried out layer by layer. This takes place after having constructed the floor level.

At Munich’s central railway station, the 2nd core route will run underneath all existing platform levels. The new S-Bahn station “München Hauptbahnhof” will be constructed at a depth of 41 m. Passengers will reach this new station and all other levels quickly and conveniently via a central main entrance.