In 1969, in conjunction with the expected openings of the Naval Training Center (1968), Florida Technological University (now University of Central Florida 1969), and Walt Disney World (1971), the SR 408 project began as another east-west corridor through downtown Orlando. This route was built to relieve traffic on SR 50.

The junction of Interstate 4 (I-4) and the East-West Expressway (SR 408) in the heart of downtown Orlando is the most heavily traveled interchange in Central Florida. The challenge of this project was the need to keep the original interchange open, with the current number of traffic lanes and traffic capacity during the day on both highways. In addition, minimal disruption of the surrounding businesses, schools, and living accommodations had to be taken into consideration during the construction. 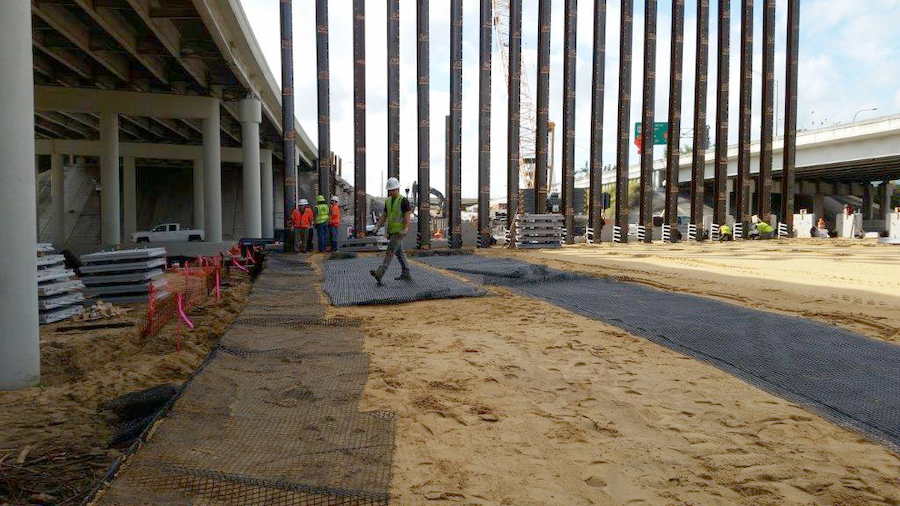 The extensive improvements involved twelve structures, including the widening of existing roadways and bridges, plus construction of new bridges, flyover ramps, viaducts, and overpasses. The soil conditions at the site proved to be a problem for the original design of 24” square prestressed concrete piles. Due to rebound from the soil and water pressure, the concrete piles were unable to be driven to design depth after several different test cycles. Rebound is caused when displacement piles are driven through soils that don’t allow the pore water pressure to dissipate quickly enough. The temporary increase in the pore water pressure prevents the pile from being driven to the required elevation.

H-Piles are non-displacement piles so they do not experience the problems with rebound that concrete piles do. A total of 177,000 feet of driven piles were used on 138 foundations for the twelve structures. The HP 12×53 an 14×89 foundations ranged in size from 3 to 56 piles in a group.

Much of the work on this project included driving piles within close proximity to active bridge foundations. Because of the low level of ground vibration produced during installation, steel H-piles proved to be very suitable for such conditions. There were no adverse effects on the existing structures from the nearby pile driving.

The H-piles were ideal due to their relatively light weight and short lengths. This allowed for ease of transportation and handling in the tight, city setting of the project. The ability to use much smaller equipment for handling and installing the piles at many project locations, especially in the middle of I-4, where there was very limited space, was very important. Using steel H-piles provided an effective alternative and helped to minimize the risk of working close to the open highways and the traveling public. 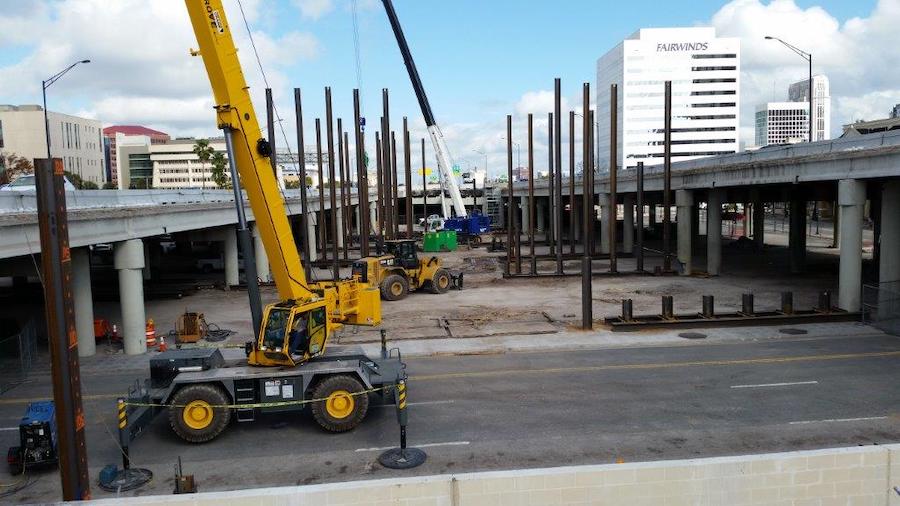 All of the piles needed for the job were stored on site in advance of construction. This eliminated costly construction delays. The ease of splicing by conventional welding made it possible to immediately proceed into production work following driving of the test pile at each pier. Production pile driving typically commenced on the same day the test pile was driven at a given foundation unit location.

By implementing a dynamic pile testing program, that was coordinated with the pile driving activities, the construction schedule was able to be expedited. In most cases, the piles consisted of two pile sections. The bottom pile sections, usually about 60 feet long, were installed with a vibro-hammer, and then the top sections were spliced on to reach the required length for pile penetration. For foundation units made up of a few piles, the bottom sections were vibrated and the top sections spliced on and tested during driving. Installation of each steel pile typically took less than an hour, including vibrating the bottom section, splicing, impact driving of the top section, and cutoff.