Many vessel berths employ monopiles or groups of piles as berthing and mooring structures.  These pile structures directly interface with the vessel.  Laminated pile wrap fenders have become a valuable and extremely popular fender system for protecting the piles in these applications.  One such application is ferry berths.  Many, if not most, ferry berths employ guide piles that line the outside of the ferry slip approaches.  However, the operators and designers of these ferry berths seldom use laminated pile wrap fenders to protect these guide piles.  Instead, many employ floating donut style fenders (see picture 1).

This is, perhaps, due to a lack of awareness of the laminated product as a possible option for these applications.  However, there is also a perception that the donut fender is better suited for ferry applications.  On paper, they offer superior energy absorbing capacity to laminated products.  Designers also value the ability of the donut fender to cover the full pile circumference and to rise and fall with the water level; ensuring that the vessel always contacts the fender in the right location.  The donut fender is also able to rotate about the pile; reducing friction forces on the pile and spreading out the wear.  However, over time the donut fender becomes less efficient at absorbing energy and more susceptible to durability problems.  Laminated pile wrap fenders are a viable alternative to donut fenders for these applications.  Laminated pile wrap fenders provide much better long-term durability and adequate functionality for a significantly lower cost. 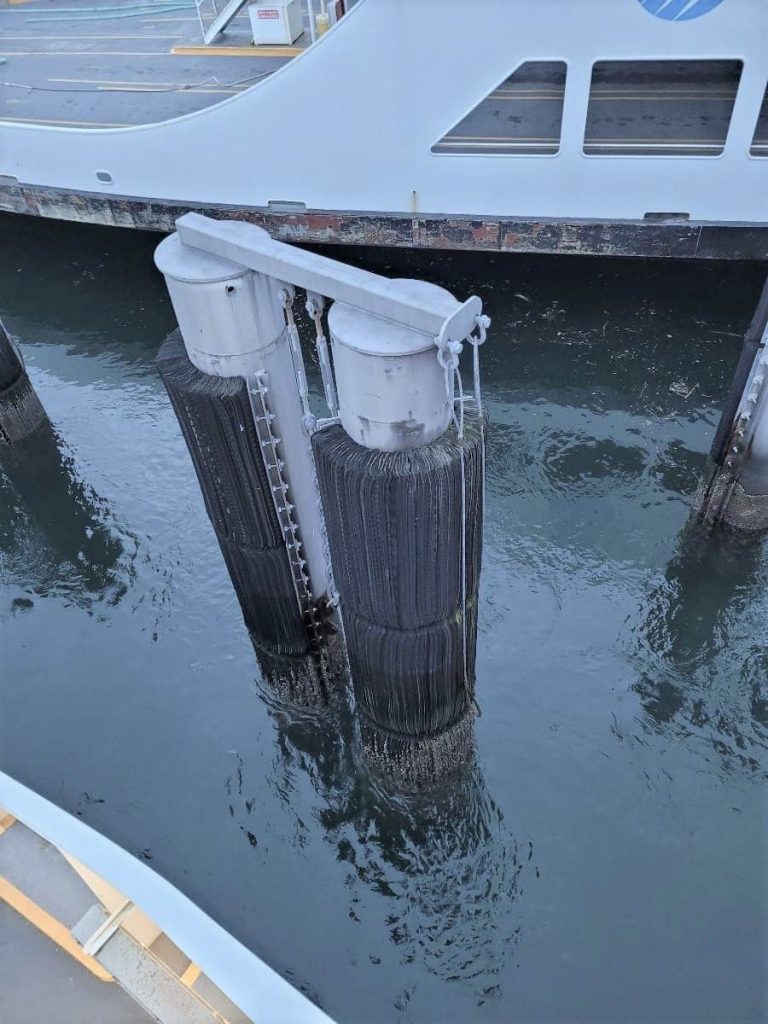 The durability of different fender system options should be an important factor in the selection of the fender type.  Ferry vessels are typically belted with a narrow rub-rail that is 4 to 18 inches in height and projects off the ferry hull.  This rub-rail is the only part of the vessel that contacts the fender system.  The result of this design feature is that the fender is subjected to repeated daily impacts over a small area of the fender.  This is especially the case with the donut fender because it floats and is impacted around the same area regardless of water level change.  As a result, the Urethane skin, and the foam behind it, will begin to breakdown in a relatively short time due to high frequency abrasion and deflection cycles in that localized area.  See the picture above (Picture 1) showing a ferry landing pile layout and donut fender systems.  It pictures how the designers decided to handle the problem.

At the ferry landing pictured above, the perimeter of the fender was lined with vertically oriented composite timbers.  The purpose of these timbers is to, one, distribute the impact load and fender deflection across a larger area of the fender, and two, provide a thicker and more durable wear surface to handle the localized abrasion cycles.   This design resulted from durability problems they were having with the donut fenders and needing to replace many damaged fenders much earlier than the manufacture’s predicted fender life.  Picture 2 shows the typical damage to the plastic timbers in as little as 3 years.  The damage would be quicker and more catastrophic to the donut fender if these sacrificial timber components were not added at significant cost.

Alternatively, the laminated pile wraps do not float.  As the water level changes, different areas of the fender are being engaged thereby spreading out the wear of the fender across a larger area.  Also, laminated fenders are manufactured using more abrasion resistant material that better handles abrasion cycles.  Laminated fenders are made from off the road (OTR) truck tires.  The rubber used in the manufacturing of these tires is really a modern marvel.  It can and must survive tens of thousands of miles worth of abrasion cycles under significant loads on highly abrasive surfaces under high temperatures.  Compared to this, the environment of a ferry berth is vastly less challenging.

The rubber used in the laminated pile wraps, as one might imagine based on its original design application, can stretch and move with good elasticity and resiliency.  Therefore, the pile wrap fender can deflect and absorb energy.  The laminated fender does not absorb energy with the efficiency of a donut fender that is right out of the factory.  However, for both laminated pile wraps and donut style fenders, the energy absorption capacity is based on the area of contact and deflection.  The foam underneath the skin of a donut fender has superior energy absorbing capacity right out of the factory, but it will begin to break down from high frequency impacts on the fender that are localized around the vessels’ rub rail.  Over time due to the breakdown of the foam, the donut fender will have an energy absorbing capacity that is similar to or less than the pile wrap because of the superior durability of the laminated system.  All evidence as to how long this might take is anecdotal, untested, and worth further investigation.

The difference in fender energy absorbing capacity, between the laminated and donut fender options, may not be significant to the design if the piling absorbs adequate energy.  The flexibility of the pile to which it is mounted provides significant energy absorption with virtually no degradation of performance over time.  By designing the piles to flex and absorb the required impact energies and using a superior abrasion resistant laminated fender, the designer can have the best of all worlds.  A fender system that has lower initial costs, superior durability, while meeting the performance requirements of the application.  Additionally, the smaller the pile, the smaller the donut fender, and the smaller the available contact area available for compression.  The result is that the smaller the pile, the more viable the laminated option becomes based on cost and durability.

The primary goal of the design should be to safely accommodate the vessels while extending the life of the piles for as long as possible within a given budget.  The laminated pile wrap fender will cost much less, typically less than half, than a donut fender system.  The laminated fender will also last longer than the donut fender system ensuring lower maintenance and upkeep costs.  These factors should all be included into a cost to benefit analysis to determine which option provides the greatest value to the long-term success of the protection systems.  Once these factors are considered, the value offered by the laminated pile wrap fenders could be much greater than other fender options, and therefore should be seriously considered.