More in Homepage - Our Picks: 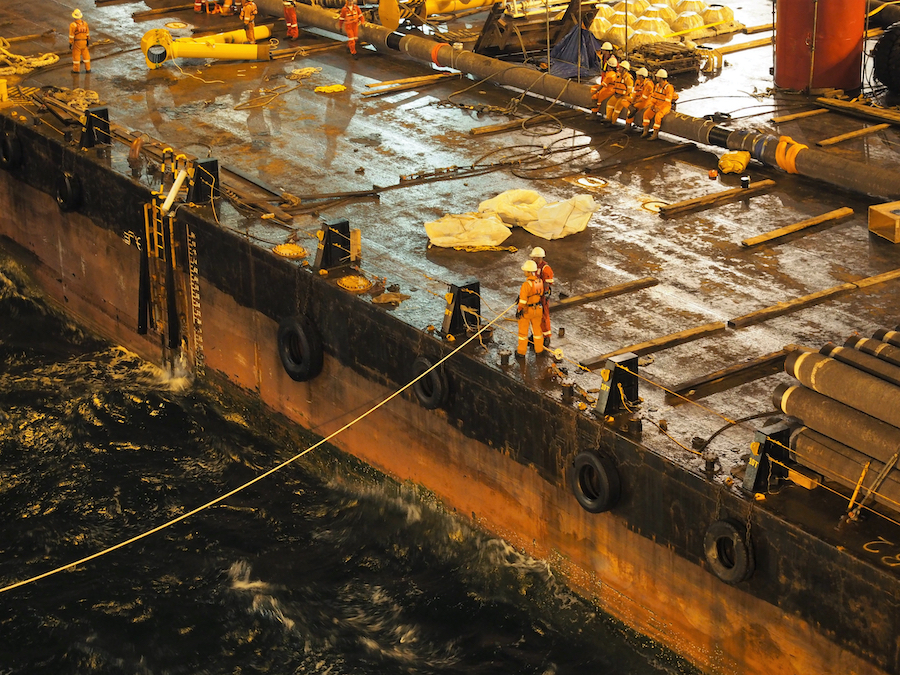 Inland barges comprise the majority of barges operating on the United States waterways. These barges are designed to operate on rivers, canals, sounds, bays, and inland lakes. Inland barges provide the most economical mode of transportation for many high-density, large volume or oversized cargos.

Different barge sizes and configurations assist in project execution and the transportation of specific materials. Barges are an integral part of the development of the many industries and communities that depend on the waterways. 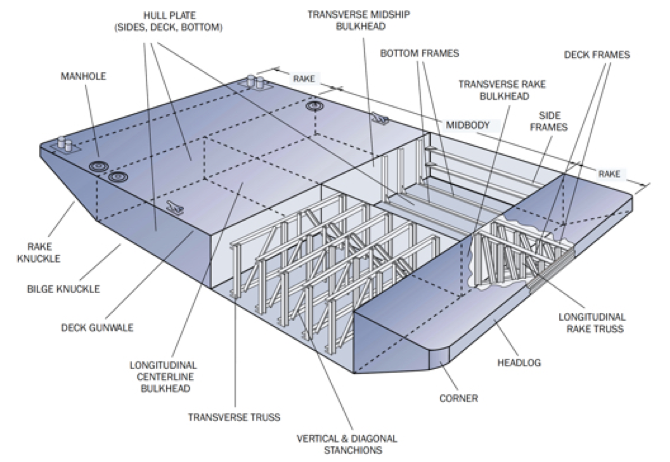 These barges are designed to carry cargo on deck and differ in size and structural design, depending on their intended use. Deck cargos include pipe, piling, fabricated structures, equipment, rock, palletized material or even horses, cattle, and rocket boosters. In some instances, certain liquid cargos may be carried in the interior watertight compartments. Deck barges are also used as work platforms for workers and machinery, thereby serving as an extension of land. Some of these barges may have raised rake decks. Please contact us for more information on the capacity, load marks, and dead weight of specific barges. 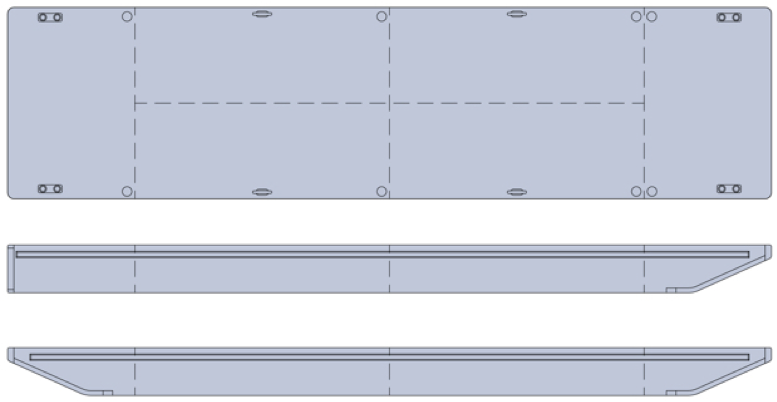 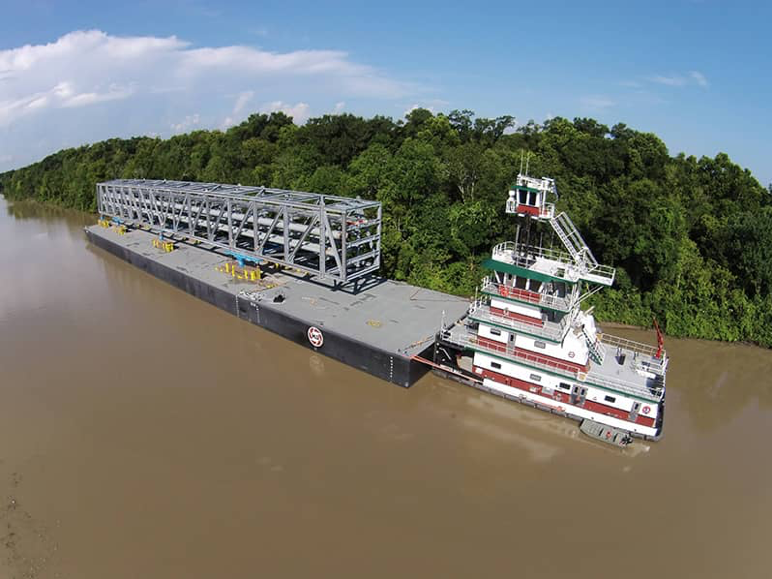 Spud barges can be specially built to support a working crane. This type of barge typically has a boxed stern that provides maximum flotation while operating a crane. Extra strengthening is generally provided under the crane working area by use of additional bulkheads, internal trusses, or deck frames. Wooden crane mats should always be used to further distribute the concentrated load and provide traction for the crane. Drop spud barges can also be used for transportation of general cargo or as work platforms. The operation of the spuds can be operated by a crane placed aboard the barge or by a spud-winch that may be installed. 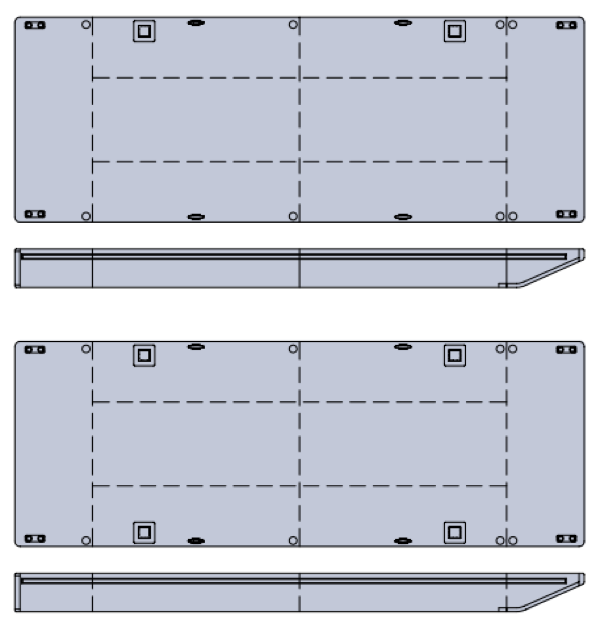 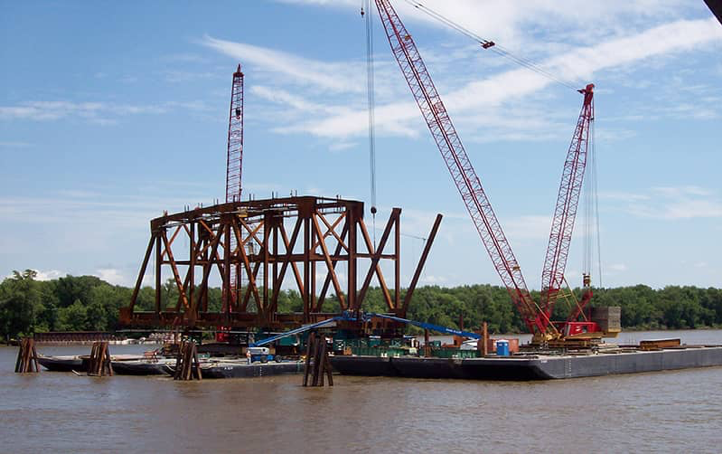 Hopper barges are usually of double-hull construction, wherein the sides and bottom of the cargo hold are separated from the hull by void spaces. These barges are designed for efficient transport of commodities in bulk, such as grain, coal, sugar, ore, steel, aggregates, timber products and numerous other cargos.

Hopper barges have a boxed, single raked, or double-raked hull configuration. The hoppers may be covered or open. Covers provide protection of cargos from outside elements. Covers may be roll-top (telescoping), or lift-off (stacking) type. 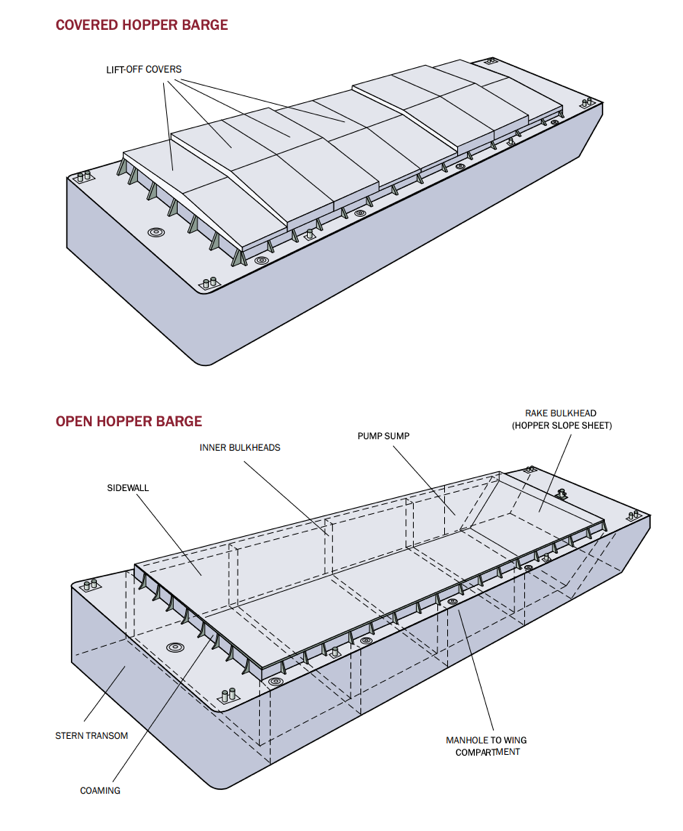 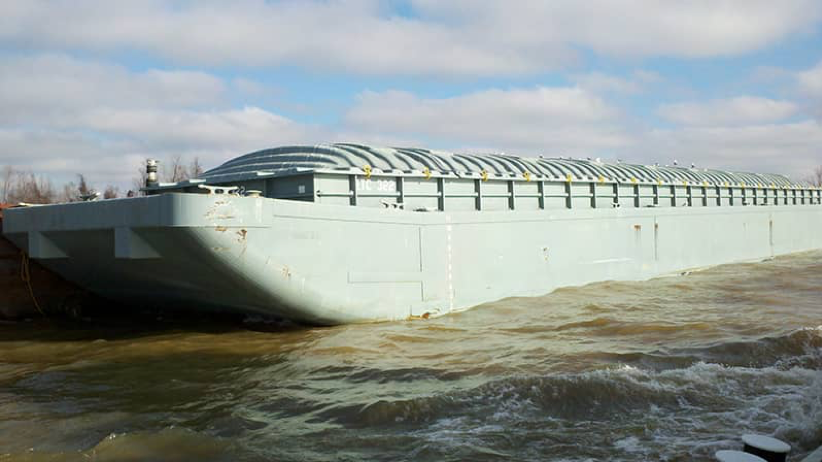 These are deck barges with cargo bins and open hopper type barges, both having stabilizing bulkheads in the cargo compartment. These barges are used at oil well drilling sites to contain and transport any liquids and (shale) cuttings produced by the drilling operation that cannot be discharged overboard because of environmental considerations. This cargo is then disposed of by an approved processing company. These barges are subject to rules and regulations promulgated and enforced by the U.S. Coast Guard, which publishes appropriate manuals for public guidance. 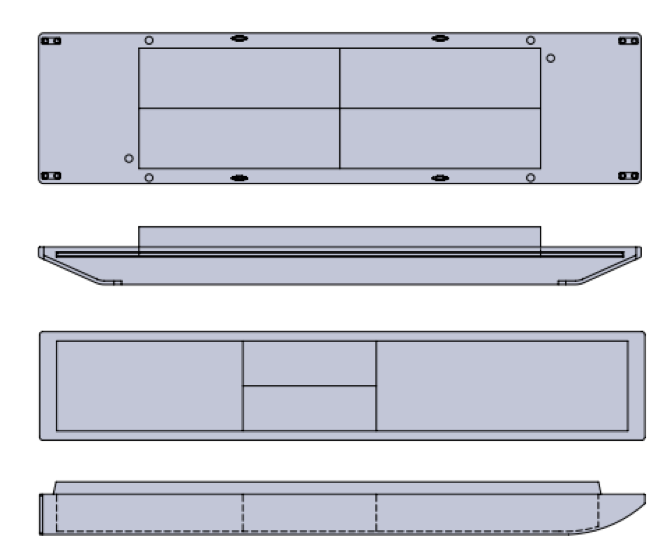 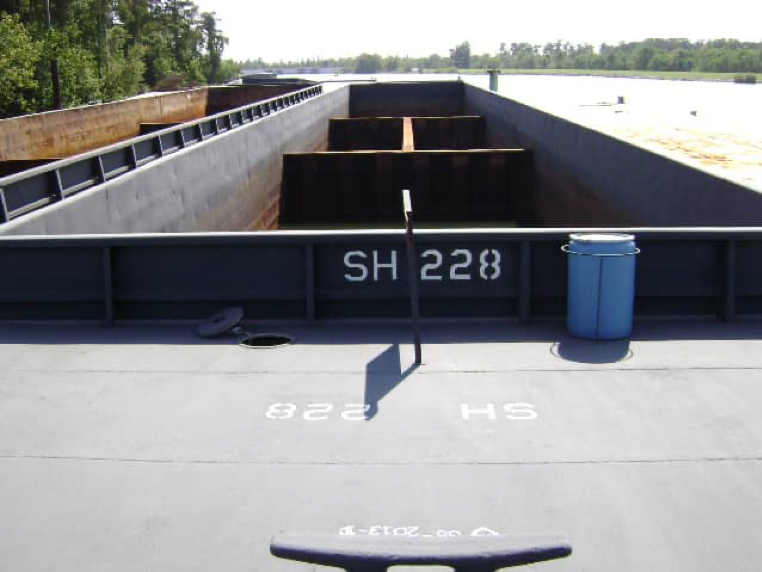 These barges are equipped with two deck-level bin tanks that provide a total of four separate compartments. Containing on-board piping and pumping systems, these barges are capable of both the circulation and discharge of fluids at any remote facility. While inland oil well drilling sites are the primary operational service location for these barges, land based storage facilities also benefit from the storage and transportation aspects they provide. 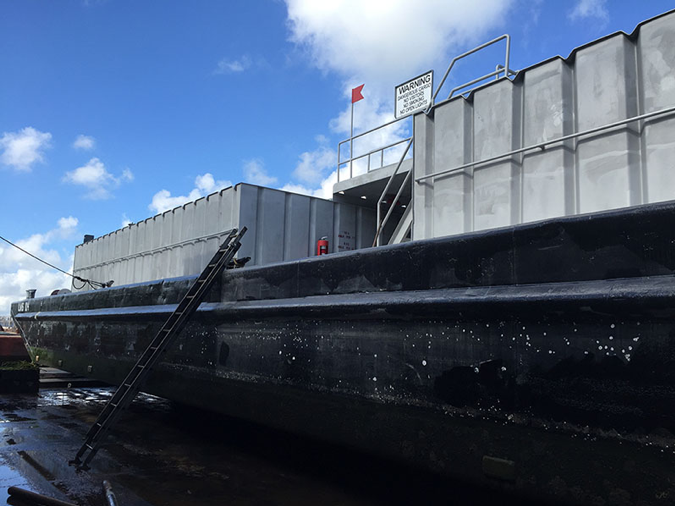 Oceangoing barges transport cargo beyond the inland water boundaries of a country. Using ocean barges as an alternative to higher speed ocean freighters can offer many advantages. Unimproved or shallow draft ports often are only accessible by tug and barge.

High-volume loads, such as large-diameter pipe, and extremely heavy equipment, such as pre-fabricated oil-production facilities, are especially adapted to ocean barging. The hazards of navigation and the forces of nature require oceangoing barges to be of specialized design and heavy construction. This results in an increase in cost of building, outfitting, maintaining, and towing such vessels.

American flag ocean barges are built to the requirements of the U.S. Coast Guard and the American Bureau of Shipping (ABS), the authorized load-lining agency. Each barge is inspected and certified by authority of these agencies, and appropriate documents are issued to be carried on board at all times. The Coast Guard and ABS should be consulted for complete information on their requirements on ocean barges. QUESTIONS THAT SHOULD BE ASKED IN THE EVENT OF AN ACCIDENT INVOLVING A VESSEL:

1) Has everything been done to assist any injured personnel?

2) Have steps been taken to minimize loss to the vessel and its cargo?

3) Has action been taken to prevent possible pollution?

4) Has the U. S. Coast Guard been notified and are there other government agencies that should be contacted?

5) Have the vessel owner and operator been properly notified?

6) Have the insurance companies for the vessel and cargo been properly notified?

7) Have the facts of the incident, including the names of people and other vessels involved, been recorded for an accident report to insurance companies or other agencies?

8) Are there any other actions to be taken to reduce loss and minimize the impact of the accident? 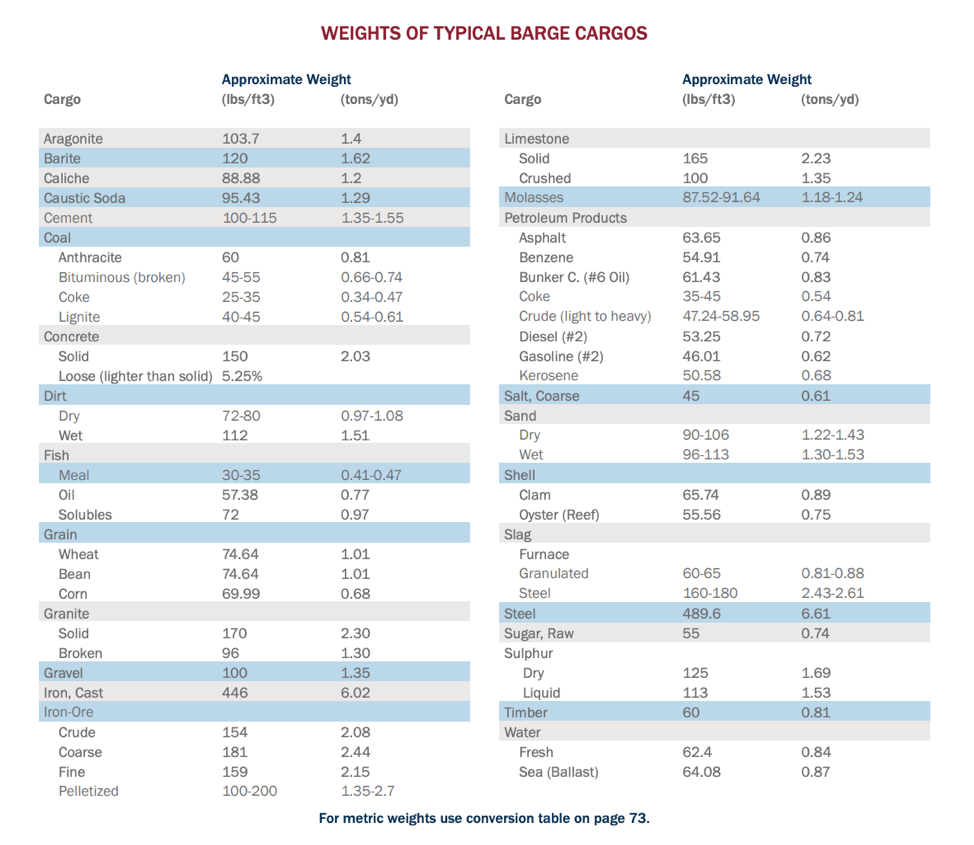