New Joint Venture shipyard one of the largest in the Group

On March 20, Vietnamese Vice Minister of Transport Mr Nguyen Hong Truong, carried out the official Vietnamese ribbon-cutting ceremony for the latest addition to Damen Shipyard Group’s portfolio. Damen Song Cam, a brand new yard, is one of the largest in the Group and represents Damen’s first formal Joint Venture yard in Vietnam.

Damen Song Cam is considered state-of-the-art, bringing a western shipyard designed to meet European health, safety and environmental standards into a Vietnamese environment. The yard will produce around 40 ships annually in the first phase.

The auspicious occasion was held on a suitable day in the Lunar Calendar in honour of Damen’s Vietnamese team. The many guests were treated to a special tour of the yard, which included many surprises, such as spectacular acrobatics, music and local dance troops.

A history of success

Damen has a well-established history in Vietnam and has been working with five shipyards for more than 12 years. Pim Schuurman, Managing Director of Damen Holding Vietnam, is delighted to see Damen Song Cam officially open its production hall. “We have successfully built 226 vessels in Vietnam with our partner yards. Vietnam has a lot of shipbuilding knowledge, the people are very hard working and in the next stage of Damen’s Vietnam journey we are looking forward to having our own Joint Venture shipyard, which has been designed to maximise efficiency.”

Chris Groninger, Managing Director of Damen Song Cam comments: “Damen started building in Vietnam for the first time at Song Cam yard and this venture was such a successful cooperation for both Damen and Song Cam that we decided to bring this to the next level and that led to Damen Song Cam.” 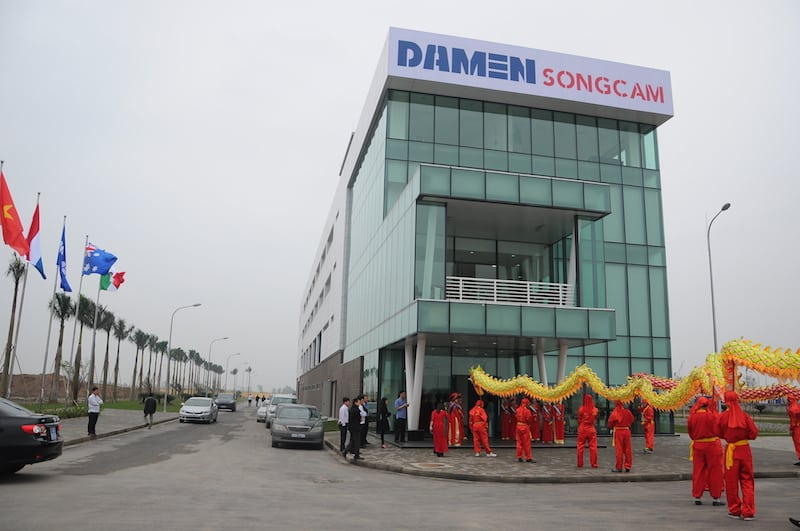 Mr Schuurman adds: “Damen built up its presence in Vietnam by subcontracting to yards in Hai Phong initially and the number-one yard was Song Cam and now it is great to see it become our partner in Damen Song Cam.”

With direct access to open sea, the new yard is based on a 43-hectare site, of which 500 m is directly alongside the River Cam. The yard has a 120 m long x 85 m wide outfitting hall, plus extensive paint and carpentry workshops.

Damen Song Cam to set to become the largest series producer in the Group therefore everything revolves around efficiency. The shipbuilding hall is in fact a dedicated outfitting hall, with three overhead cranes of 25- tonnes each over every bay.

Additionally, Mr Schuurman explains special work platforms are fitted at 5 m and 8 m, so employees are able to work very close to the main deck of the vessels, making the logistics very efficient and the walking distances very short. “Components can be stored on the platforms so outfitters don’t need to climb up and down; it is as if you are building the vessel on the ground floor. Everything is to hand so it is less tiring for people.”

Swing arms on the top of the vessels give access to power, oxygen and compressed air. A Rolls-Royce Syncrolift® shiplift, with a platform of 60 m long x 24 m wide, is also on site. And directly next to the site of Damen Song Cam there is a further 43 hectares, which will be developed as a maritime industrial zone. 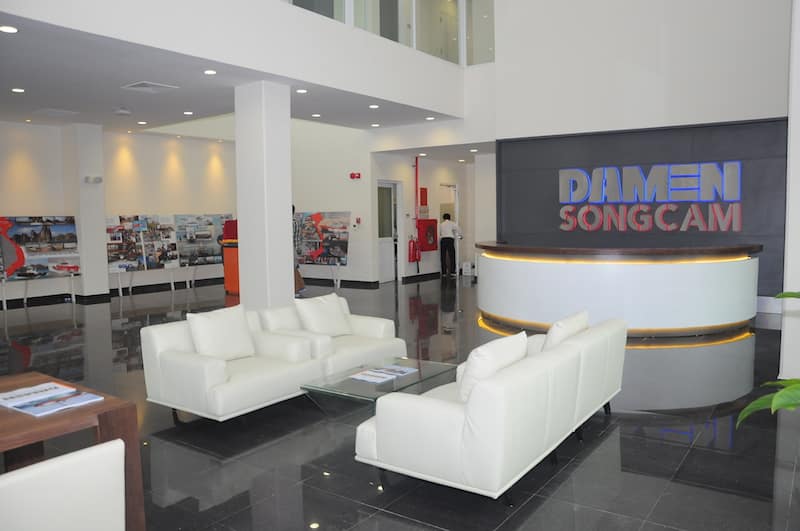 In the short term, Damen Song Cam will also be carrying out all of the detailed engineering in Vietnam and they will be directly ordering parts and components within Damen’s framework agreements.

Around 300 people currently work at Damen Song Cam but when phase 2 is realised – whereby up to 80 vessels can be built annually – this could rise to 800. Damen indirectly employs around 5,000 people in Vietnam and most people have worked for the Dutch shipyard group for many years.

Damen has invested a great deal in training and the transfer of knowledge to Vietnam. More than 50 engineers have been trained in the Netherlands and many more will attend courses in the Netherlands and Vietnam. Additionally, an office has been established in Hai Phong and in the next six months Damen is looking to open a base in Hanoi.

Mr Schuurman, who has been visiting Vietnam for decades working on building long-lasting relationships with the yards there, is very proud to see a brand new shipyard come into being.

And Damen’s bond with the country is becoming even stronger as the Group’s relationship with its other partner yards is formalised into joint ventures, he adds.

Mr Schuurman: “In Vietnam we have built up long term partnerships and friendships based on trust and respect and may this continue in the future!”