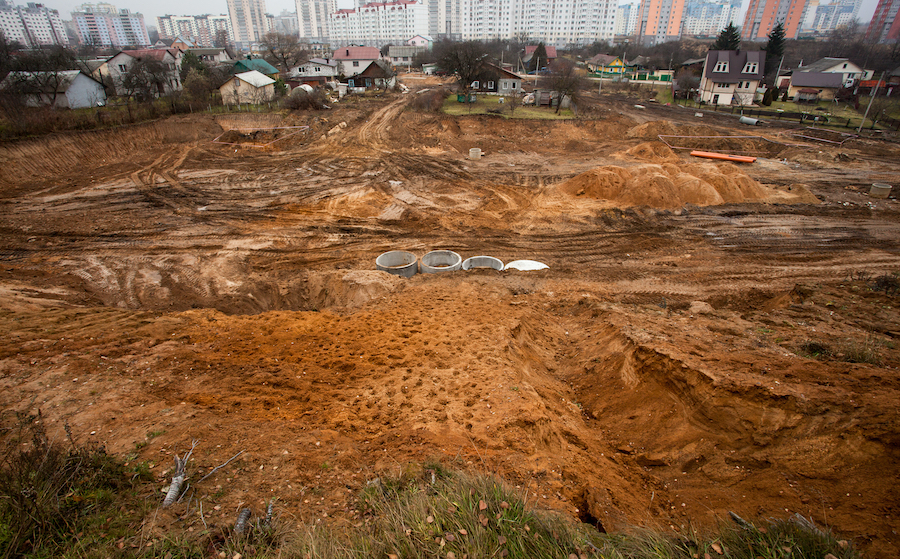 Whatever is being built, it is only as strong as the soil or rock it sits upon. For foundation engineers, knowledge of soil mechanics is more important than ever as we venture into locations with low quality, and even unknown, soil conditions.

Look closely at the dirt underneath your feet. You are standing on mineral particles that were formed from decomposed rock. Rock breaks down due to weathering (by air, ice, wind, and water) and chemical processes. Soil also includes air, water, or organic materials derived from the decay of vegetation. (And other living things, like birds and bugs.)

There are four basic soil types:

Sand is made up of very tiny pieces of weathered rock (typically granite, limestone, and quartz). It’s inability to hold water and lack of nutrients make it a poor choice for growing most types of plants. However, coconuts and melons are best grown in sandy soil. Sand is best used for drainage systems.

Silt is primarily found near water – like rivers and lakes. That’s because this type of soil is easily moved by currents. Silt is comprised of mineral particles that are larger than sand, but tinier than clay. Because it is both fine and smooth, it holds water well – particularly when compared to sand. Silt is quite fertile and is often used to improve the quality of the soil used to grow crops.

Clay is sand’s polar opposite. There is little or no air inside of it causing the particles to closely pack together. It will readily hold water, which makes it sticky. But, dry it out and it’s very smooth. Obviously, the perfect choice for making a vase, but lousy for drainage. It’s the densest of soils and provides no breathing room for plant roots to expand and grow.

Loam is a combination of the other three types of soil. It holds the best qualities of silt, sand, and clay. It can retain moisture, has a healthy amount of nutrients, but is not so dense that it will keep roots from expanding. It is perfect for farming and for this reason is called agricultural soil. 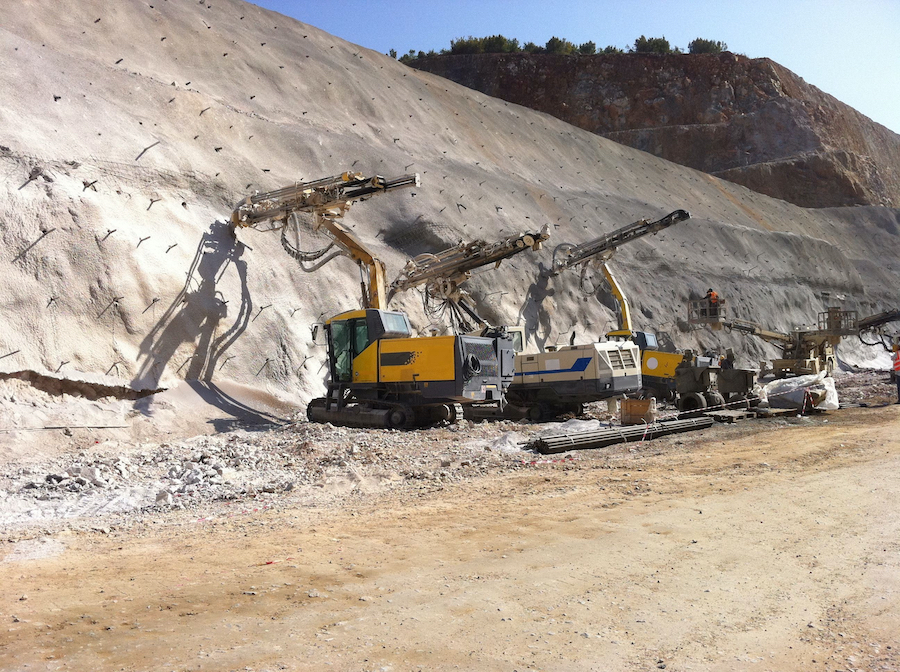 How is Soil Classified?

The Unified Soil Classification System (USCS) is a standardized way for geotechnical engineers to describe soil. The classification is used in the design of structural-related projects, such as bridges, retaining walls, and buildings. This more precise classification is based on grain size analysis and Atterberg Limits testing of soil samples from the proposed site.

The Modified Unified System (MUD) procedure involves visually and manually examining soil samples with respect to texture, plasticity and color. Soil descriptions are based upon the judgment of the person making the description. Classification tests are not intended to be used to verify the description, but to provide further information for analysis of soil design problems or for possible use of the soil as a construction material.

This system is intended to provide the best description of the soil sample to those involved in the planning, design, construction, and maintenance processes.

There are many different ways to determine how a soil will perform. Here we define some of these characteristics:

Shear strength is a measure of how much force a soil can withstand before it collapses against itself.

Permeability describes how readily water flows through the soil.

Compressibility describes how easily the soil’s volume is reduced when subjected to mechanical loads. The rate of consolidation is also important so that settlement of the structure is within a limit that extends its use and durability.

Soil voids are pockets of air and water within the soil. Consolidation is the compression that occurs when steady pressure is applied to the soil and the water within the voids is expelled. This characteristic usually applies to silts and clays. Clays that are saturated with water consolidate at a slow rate because their permeability is low.

Consolidation is different from compaction. Compaction happens when unsaturated soil increases in density because air is pushed out of the voids. Consolidation of soil occurs when its density increases because water is drained from its voids.

Other Information for Describing Soils

You may see a bunch of brown dirt, but the foundation engineer sees (and tests for) much more.

Color description is restricted to two colors. Examples of soil color include brown, black, gray, and red. If soil is comprised of three or more colors, it should be described as multi-colored or mottled. The two predominant colors are then noted.

The in-situ moisture content of a soil is described as dry, moist, or wet.

Soil is described as very plastic, plastic, low-plastic, or non-plastic. The soil sample must be in moist or wet condition for plasticity determination. Testing plasticity is fairly simple:

Soil structure is described as fissured, blocky, or layered.

Can be broken along visual fractures with little resistance.

You can easily break the soil down into angular lumps. These lumps cannot be further broken down (without inordinate pressure).

Different soils are layered on top of each other. These can be differing colors or soil types. Layers less than a quarter of an inch thick are described as laminated. Fine-grained layers are identified as varved.

Any additional descriptive terms considered helpful in identifying the soil should be included, such as calcareous and cemented.

This type of soil has high levels of calcium and magnesium carbonate – perfect for growing grapes for wine. 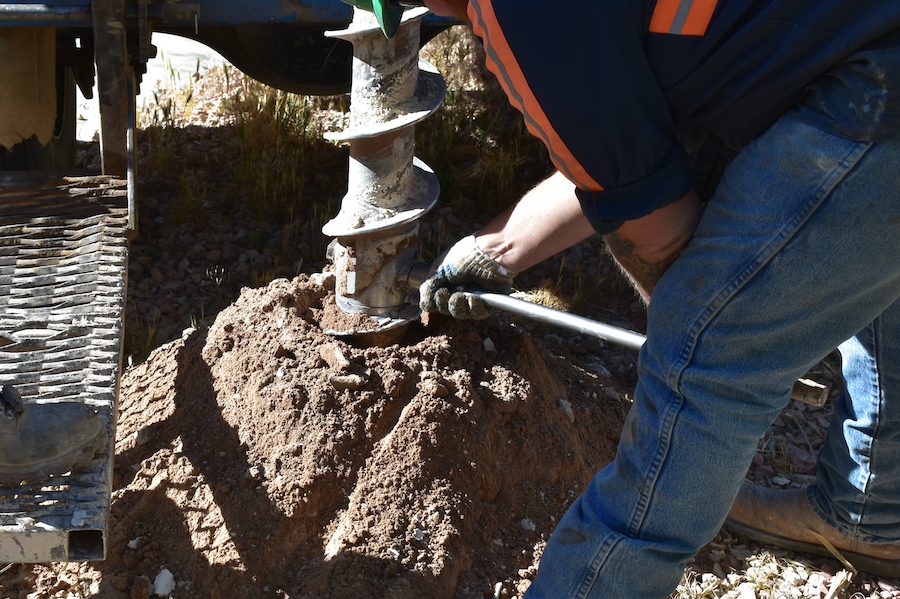 The Occupational Safety and Health Administration (OSHA) classifies soil as Type A, Type B, or Type C. Why do they care? Because every year 40 construction workers die when trenches collapse. Knowing the type of soil – and implementing the proper precautions — before they start digging literally saves lives.

Type A soil is the safest to excavate. Type C soil is dangerous.

An easy and fairly reliable way to determine the type of soil is to test its cohesiveness. (Soil is cohesive or granular. Cohesive soil sticks together. Stickier soil has more clay in it.) To estimate the compressive strength of the soil, stick your thumb in it. You really have to try hard to make an indentation in Type A soil. You thumb will sink up to about the end of your thumbnail if it’s Type B. If your thumb sinks all the way into the soil sample, it’s Type C.

Type A soil has a compressive strength of at least 1.5 tons per square foot. It is not fissured nor does it have water seeping through it. It should not vibrate from pile drivers or heavy traffic.

Type B soil does not stick together as much as Type A soil. Its compressive strength is between 0.5 and 1.5 tons per square foot.

Type C soil is very unstable because its particles don’t stick together and it has a low compressive strength equal or less than 0.5 tons per square foot. Any soil with water seeping through it is classified as Type C.

The foundation engineer is responsible for determining the soil conditions at a job site. Investing in a boring and testing program may prevent costly failures or over conservative design. Spending a few thousand dollars could result in design and construction savings of hundreds of thousands of dollars.

That pile of dirt on the job site is critical to project planning and design. The foundation engineer must accurately identify the specific characteristics of the soil. The safety of the structures built upon that soil depend on it.