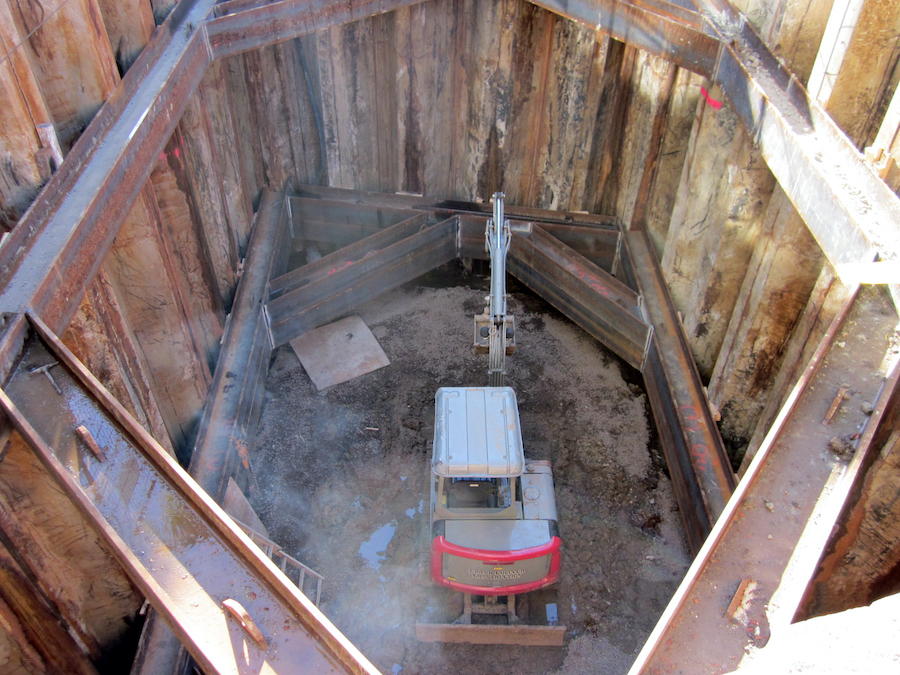 The terrain of your construction site may not be comprised of regular old dirt. In our articles on the basics of soil identification and rock identification, we discussed what types of material you will typically have to build upon. However, there are several types of soils that create special problems in design and construction. Those that experience large changes in volume are particularly problematic. In this article we will review special soils and problem conditions.

There are several types of special soils that are difficult to build upon including:

Colloids or fibrous materials such as peats, organic silts, and clays of many estuarine, lacustrine, or fluvial environments are generally weak and will deform excessively under load. These soils are usually not satisfactory for supporting even extremely light structures because of excessive settlements.

Additional loads imposed on soil consolidated only under the weight of the existing environment will cause significant long-term settlements, particularly in soft and organic clays. These clays can be penetrated several centimeters by the thumb. The magnitude and approximate rate of settlement can be calculated to determine whether it can still be acceptable to build upon. Bottoms of excavations may heave and adjoining areas settle unless precautions are taken to prevent this movement.

The ratio of undisturbed to remolded strength is the sensitivity of clay. Clays having remolded strengths 25% or less of the undisturbed strength are considered sensitive and subject to excessive settlement and possible catastrophic failure. Such clays pre-consolidated by partial desiccation or erosion of overlying soil may support shear stresses caused by foundation loads. Of course, these loads must be well within the shear strength of the clay.

Swelling and Shrinking Clays and Shales

Clays, especially those containing montmorillonite or smectite, expand or contract from changes in water content and are widely distributed throughout the United States and the world. Clay shales may swell significantly following stress relief as in a cut or excavation and following exposure to air. Foundations in these soils may have excessive movements unless the foundation soil is treated. Or, if provisions are made in the design to account for these movements or swell pressures developed in the soil on contact with moisture.

The open, porous structure of loosely deposited soil such as silty clays and sands with particles bonded with soluble salts may collapse following saturation. These soils are often strong and stable when dry. Undisturbed samples should be taken to accurately determine the in-situ density.

All granular soils are subject to some densification from vibration, which may cause significant settlement and liquefaction of soil below the water table. However, minor vibration, pile driving, blasting, and earthquake motion in loose to very loose sands will cause settlements in these soils.

Till is usually a good foundation soil. However, boulders and soft layers may cause problems if undetected during the field investigation.

There are several soil conditions that are particularly challenging, including:

Soils that fill abandoned waterways are usually weak and cut-offs highly compressible. The depth of these soils should be determined. Estimates should be made of potential settlement early in the design phase. This allows time for development of suitable measures for treating the soil or accommodating settlement.

Potential landslides are not easily detected, but evidence of displacement such as bowed trees and tilted or warped strata should be noted. Sensitive clays and cutting action of eroding rivers significantly increase the risk of landslides. Slopes and excavations should be minimized. Seasonal variations in the local water table should be considered in the design. Finally, it is important to make suitable arrangements for drainage provided at the top and toe of slopes.

The retreating continental ice sheet left large blocks of ice that melted and left depressions, which eventually filled with peat or with soft organic soils. Lateral dimensions can vary from a few to several hundred feet. Depths of kettle holes usually do not exceed 40% of lateral dimensions and can sometimes be identified as shallow surface depressions.

Mined areas leave voids beneath the surface soil that may lead to severe ground movements. Sinkholes result in differential settlement from subsidence or caving. Sinkholes are deep depressions formed by the collapse of the roofs of underground caverns such as in limestone.

Maps of previous mined areas are helpful when available. (Link to articles about abandoned mines.) Published geological data, nondestructive in situ tests, and past experience help indicate the existence of subsurface cavities. Investigations should be thorough to accurately determine the existence and location of any subsurface voids.

Lateral distortions are usually not significant but can occur in highly plastic soils near the edge of surface loads. These distortions can adversely affect the performance of foundations of structures and embankments. Driven piles can cause large lateral displacements and excessive pressures on retaining walls.

Cohesionless soil, especially loose sands and gravels, can densify and settle when subject to machine vibration, blasts, and earthquakes. Distortion with negligible volume change can occur in loose, saturated sands due to liquefaction. Low-level sustained vibration can densify saturated sands.

These soils have great potential for volume change with change in water content. Clay soils with high colloidal contents, such as montmorillonite, found in regions where high rainfalls are followed by long periods of little or no rainfall, exhibit high volume increases and decreases. Laboratory tests for determining the swell potential should be conducted.

Problems associated with swelling and shrinking soils are total and differential settlement or heave, excessive pressures on retaining structures, and cracking of embankments.

Suitable foundations can be provided by removing and replacing the undesirable soil, isolating the structural element of foundation from the soil, designing a structure capable of resisting heave pressures, or preventing heave from occurring by prewetting. Membranes and surficial grading can accomplish prevention of water access.

Ultimately, properly identifying special soils and problem conditions are a critical part of the building process. Project managers should allow enough time to determine how the results of the soil and conditions analysis will impact the design. Proper soil preparation and risk mitigation will result in a strong and durable foundation.